The GLCL serves residents of Empire, Glen Arbor, and Kasson Township. It is a Michigan Class 1 library, with an official district population of 3650. This includes many seasonal residents and summer visitors. Our operations are funded primarily by a property tax assessment levied in the service district. For 2020, this rate is set at 0.2775 mills, which generates 90% of our total operating income. This millage will fund operations through 2021.

The library is a member of the Mid Michigan Library League, which provides support for interlibrary loan, technology assistance, professional development, and library advocacy.

The Glen Lake Community Library (GLCL) was established in 1977 to serve Empire and Glen Arbor Townships. Its first home was a small rented building at the corner of Front and Union streets in Empire. In 1979, Kasson Township joined the library’s service district.

In 1982, citizen leaders came up with a plan to purchase the old Empire Fire Hall, secure a rent-free, renewable lease from the Village of Empire, and launched a fundraising campaign to redevelop the 1,500 square foot building, more than doubling the size of the old library.

In 1996, a successful 20-year property tax millage supported by all three townships provided funding to further expand the library to 3,000 square feet. The new wing included a small meeting room, public access computers, an office, and additional shelf space for the library’s growing collection. Hours of operation were expanded, and the library was open six days a week. In 1997, the library’s first full-time director, David Diller, was hired.

Over the next 20 years, usage of the library steadily increased, with more services, programs, and an ever-expanding book and media collections. During this period, several generous bequests from local benefactors provided the beginning of an endowment fund for future needs. As usage of the library increased, the limits of the existing building became more apparent.

In 2013, an adjacent residence became available and the library was able to purchase it using the endowment fund. Now the GLCL was to begin planning in earnest for future expansion. In 2014 the Board of Trustees and library staff developed a long-range plan, which confirmed that additional and enhanced space was needed for the library to continue its development.

In 2016, a 0.28 operating millage proposal was overwhelmingly supported by voters in all three townships. Community surveys and visioning sessions gathered valuable feedback about the future of the library.  A professional assessment of the library facility needs was conducted. Quinn Evans Architects were selected to lead the design of the new building. An exciting new exterior and floor plan was developed, incorporating an expanded children’s area, quiet reading lounge enhanced with a fireplace, study rooms, work desks, expanded public computer and WiFi access, and a spacious program room for library and community events.

In 2018, a volunteer-led Capital Campaign was launched, with an ambitious goal of raising the needed $1.758 million needed for the new facility. Gifts from more than 450 donors, local government, and charitable foundations met that goal in less than a year, allowing construction to begin in April 2019. Essential library operations were relocated to a rented building, affectionately dubbed the “Limebrary”, due to its vivid green exterior. With the new facility nearing completion in summer 2020, we’re preparing for the move back to Front Street, and a new chapter in our history. 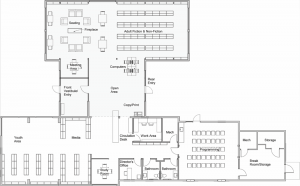